It's Monday 18th January 2021. We hope you are all well and it has been so lovely to see some of your work being sent to us over email. Don't forget to keep doing this at callisto@studleygreen.wilts.sch.uk

Before you start your days learning, don't forget to sign the online register so that we can track of who is here.

In your books, please put today's long date at the top of the page and for each piece of work you do, you need  a new section with the title of the subject and the LO written. Don't forget your perfect presentation!

Thanks to Ellis, Billie and Alex, Millie and Paige who have all sent us some of their work last week. Keep it up.

Get your brain switched on with these challenges. 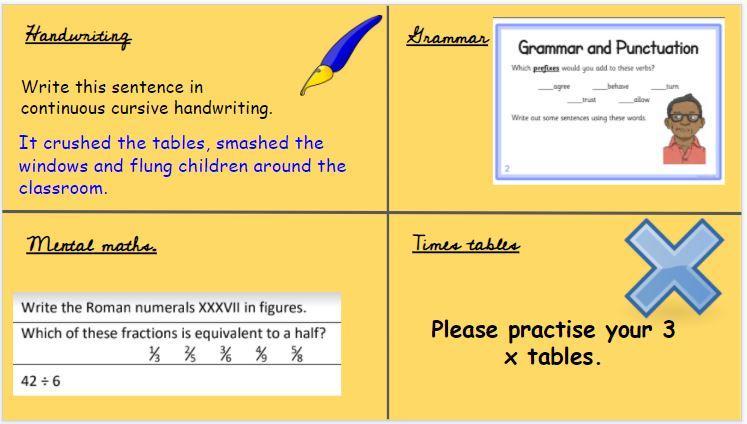 PE - Let's wake ourselves up and get the day going.

Below is a list of your new spellings for this week. A couple are ones that you have had before but need more practice on. Have a go today at using the 'look, cover, write, check' method using the sheet below. ENGLISH - New section and with the heading 'English' and LO written please.

LO: I am learning to write my own problem to a story by innovating.

Today, we are going to start writing our own problem to the story. We have learnt the section from 'the game' which describes the problem and we know it really, really well. Now it is time to start innovating it, (changing it) paragraph by paragraph, so that it becomes our own. You have had a go at innovating some of the sentences from the problem in 'the game' last week.

We will just do the first paragraph  so that we can spend time making it really, really good.

Below, is the paragraph that I would like you to innovate, taken straight from 'the game.' Then below that, is a model innovation for you to further understand how to innovate. 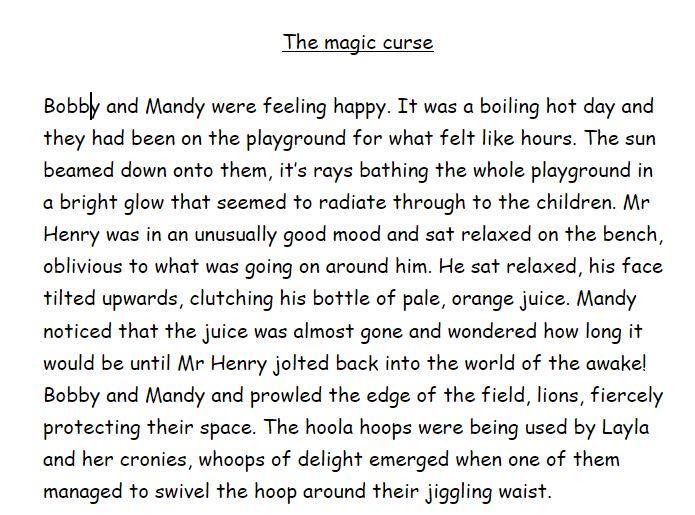 Click Monday's assignment. We will be reading ' What happens during a Solar Eclipse?' and asking INFERENCE questions.

If you are unable to access the site. Please read the article below, and answer the following questions:

What is a solar eclipse?

A partial or total solar eclipse occurs when the Moon comes between the Sun and the Earth and casts the darkest part of its shadow (the umbra) on Earth. The darkest point of the eclipse, or where there is totality (the Moon covering all the Sun) is almost as dark as night.

Why does it happen?

Although the Sun is four hundred times larger than the Moon, because they are so far away from each other, it appears from Earth as if they are the same size and one is covering the other, causing the Moon to cast a shadow on part of the Earth. In order for a solar eclipse to take place, the Sun, Moon and Earth must be aligned in a perfect, or near perfect, straight line. During a solar eclipse, the orbiting of the Moon around the Earth and of the Earth around the Sun, coincide in a straight line, causing an eclipse. This only happens once or twice a year in different places around the planet and only as a total solar eclipse in the same place about every one hundred years. This means that you may only see one eclipse, in the same place, in your lifetime.

What happens during an eclipse?

During both a total and partial eclipse, the pathway of the orbiting Moon moves across the Sun, blocking out its light and its warmth. As a result, there is a dramatic reduction in the light levels and temperature. As the light from the Sun diminishes, it is as if night is falling; birds stop singing and go to roost and temperatures drop by up to 3 degrees Celsius. In a total solar eclipse, the Sun can be totally covered for several minutes leaving birds and animals silent, as if it is night. After about two hours, the Moon will have orbited away from the Sun and full light and warmth is restored.

What will I see during an eclipse?

In a partial eclipse, if there is very little cloud cover, then it is possible to see large ‘chunks’ of the Sun being ‘eaten’ by the Moon, until at particular times, the Sun appears to look like a crescent-shaped moon.

In a total eclipse, as the Moon almost covers the Sun, a phenomenon known as the ‘diamond ring’ can be viewed. This occurs because the outline of the Moon is not smooth due to its mountains and craters. As a result, when the Moon passes in front of the Sun, bright beads of light shine through the grooves; these are known as Baily’s Beads. As the Moon edges closer to totality, the beads disappear one-by-one until there's only one bead left, which shines like a diamond ring in the sky. This is known as the diamond ring effect.

What is the difference between a partial eclipse and a total eclipse?

The main differences are that during a total solar eclipse, the Sun is completely covered by the Moon. Where the Moon’s shadow (umbra) falls on the Earth, it is plunged into darkness, as if it is night and the temperature drops significantly. During a partial eclipse, only part of the Sun is covered. In some places, it may be 98% covered, leading to relative darkness and in other places during that particular solar eclipse, it might only be only a small amount making little difference to light and warmth. During a partial eclipse, you won’t get to see Baily’s Beads nor the diamond ring effect.

Throughout history, eclipses have caused fear for humans. The Greeks believed that the solar eclipse was a sign that the gods were angry and death and destruction were on their way. Even today, in some cultures, they are regarded as a bad omen. In India, people fast as they believe that any food cooked during an eclipse will be poisoned and pregnant women are encouraged to stay indoors so the Moon’s shadow does not bring bad luck to the baby!

In truth, the real danger from an eclipse comes from looking directly into the Sun, either with the naked eye or through a lens from a camera, telescope or phone. Experts warn that looking directly at the Sun can cause blindness, as the UV rays can lead to burns at the back of the eye even if you use sunglasses.

There are many ways to observe an eclipse closely and safely, which include:

A solar eclipse is a beautiful accident of nature, which occurs when the Sun, Moon and Earth are all in a straight line causing the Moon to block out the light of the Sun on the Earth. Due to the lack of sun, temperatures fall and daylight dims as if it is twilight. Although it is an amazing spectacle, observers are warned by experts that looking directly at the Sun can cause blindness.

A solar eclipse is a beautiful accident of nature, which occurs when the Sun, Moon and Earth are all in a straight line causing the Moon to block out the light of the Sun on the Earth. Due to the lack of Sun, temperatures fall and daylight dims as if it is twilight. Although it is an amazing spectacle, observers are warned by experts that looking directly at the Sun can cause blindness.

Start with your THREE times tables, and then 10 minutes TT rockstars. This week we will be looking at multiplication methods again. This is something we started just before christmas, so hopefully this is helping you gain confidence. SCIENCE: - New section with a heading of 'science' and LO written please.

LO: To describe the movement of the moon, in relation to the Earth.

Today, we will be learning about the moon. This includes the movement of the moon, but more specifically, the phases of the moon. By the end of this lesson, I will expect you to be able to answer why the moon appears to grow and get smaller at different stages of the month.

Below, are the links to he videos that you can watch to help with your understanding. As you progress through the slides, they will tell you when to watch these. There are also your slides. I have attached the 'everybody reads' separately as it was a it small on the slide. Fine if projected onto a big screen, but not so much otherwise.

There are also 2 short tasks to complete today, they are both explained at the end of the slides. You have a sheet given, to help you with one of the tasks. 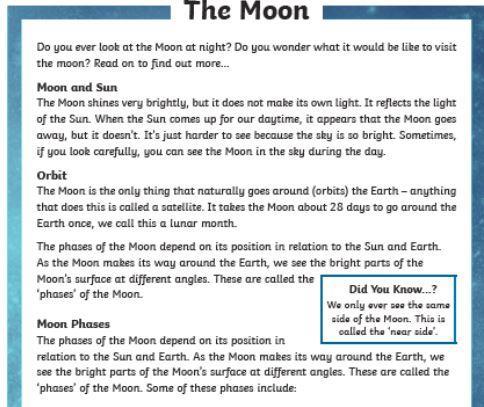 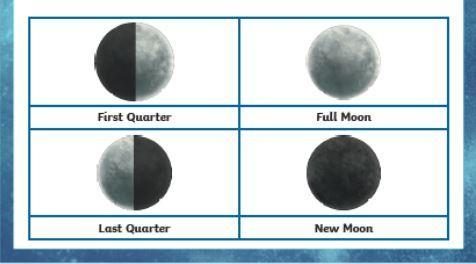 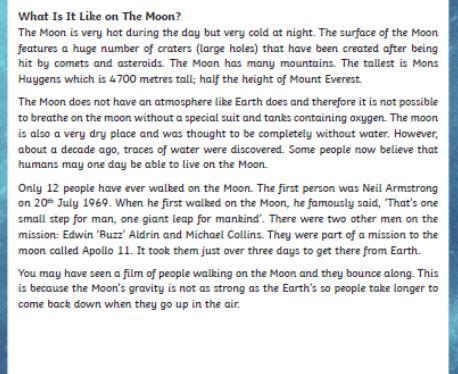 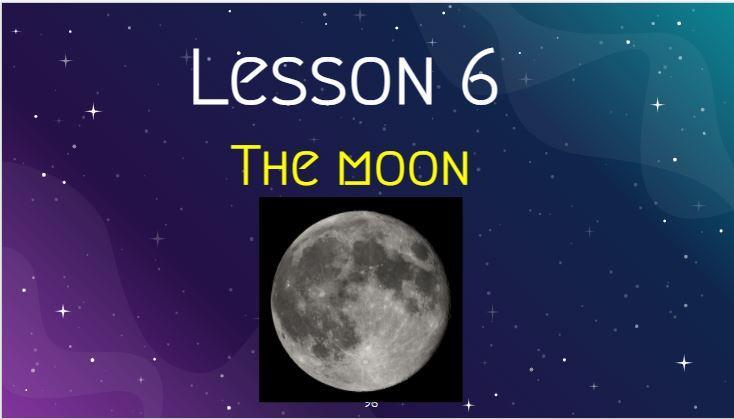 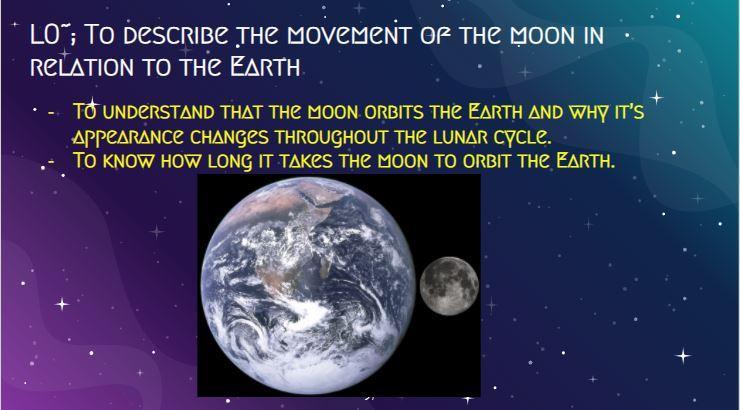 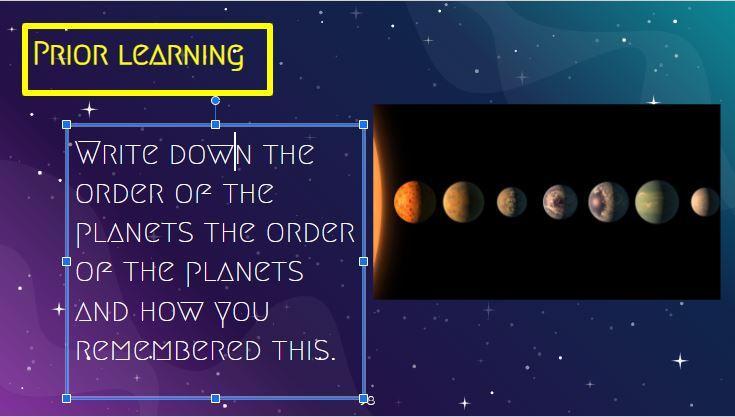 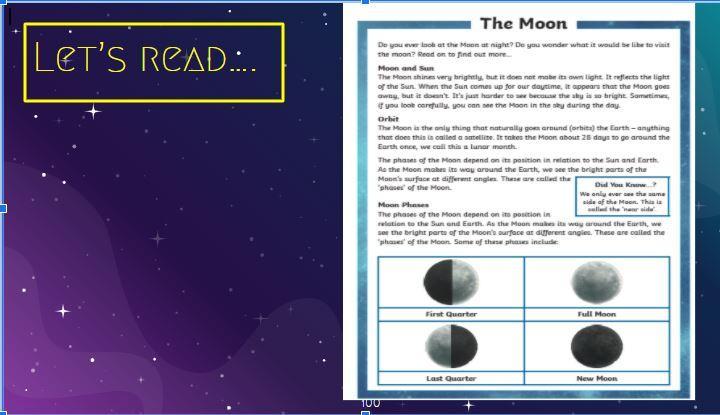 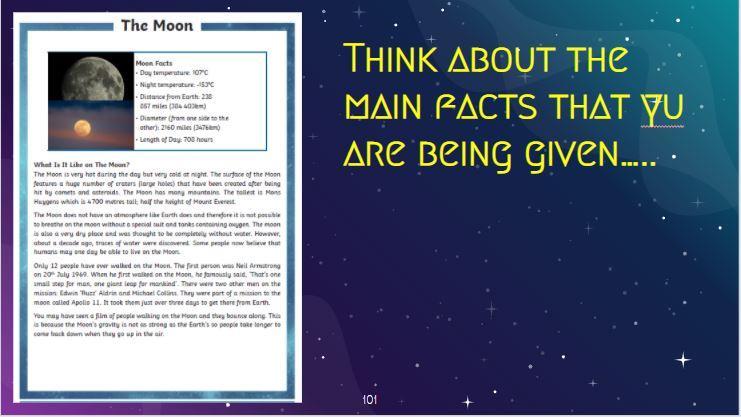 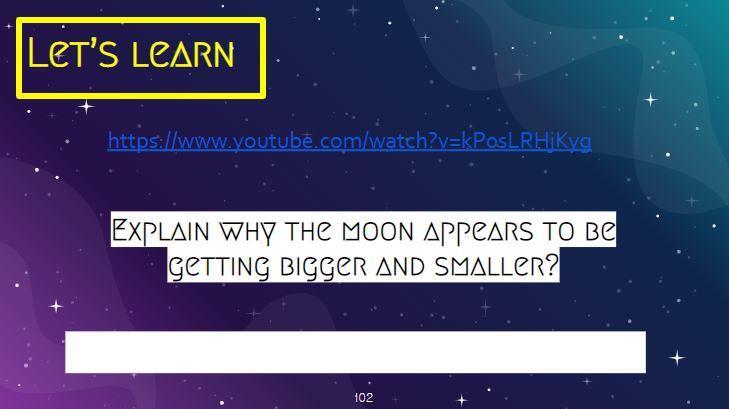 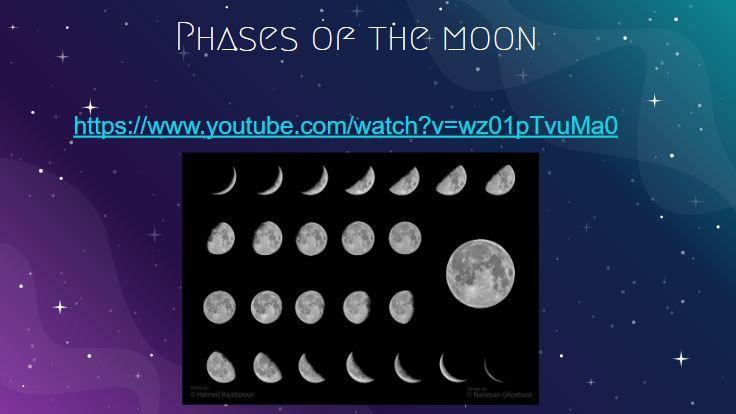 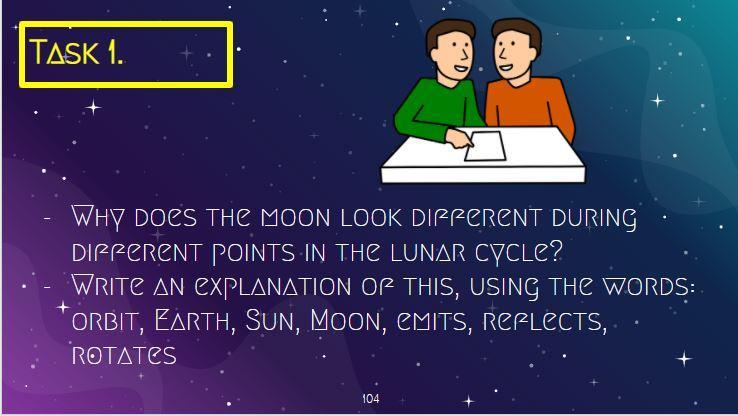 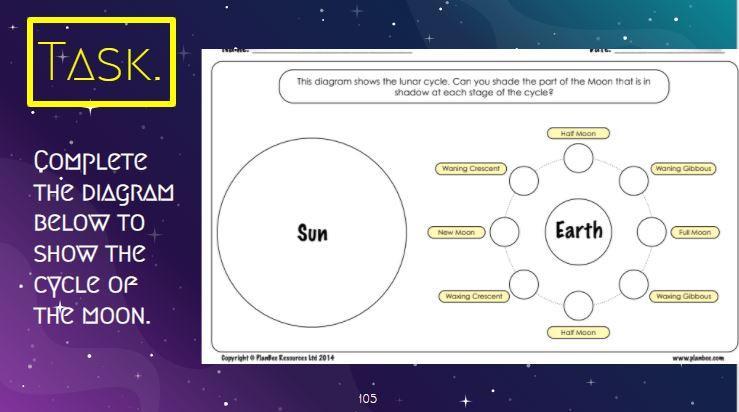 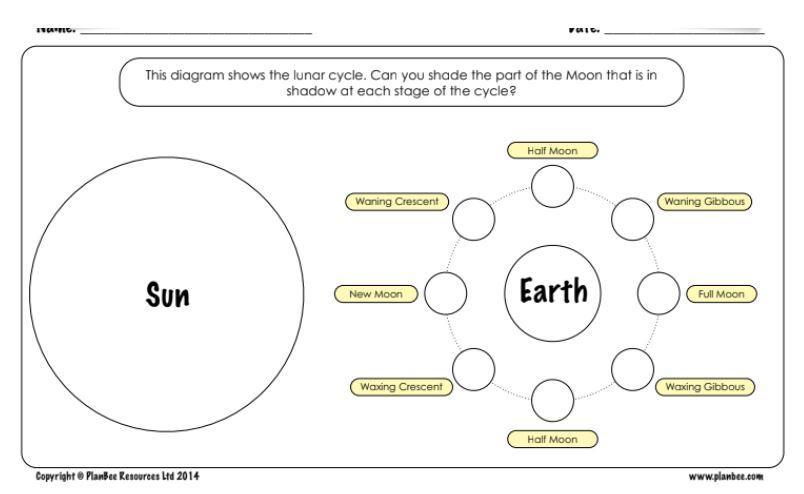